We got a new video from World of Aircraft: Glider Simulator and are asking for some alpha/beta testers! Check this post. 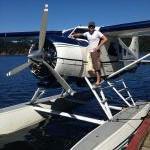 By Tino., August 15, 2017 in Manual Flight, Autoflight and Flight Management