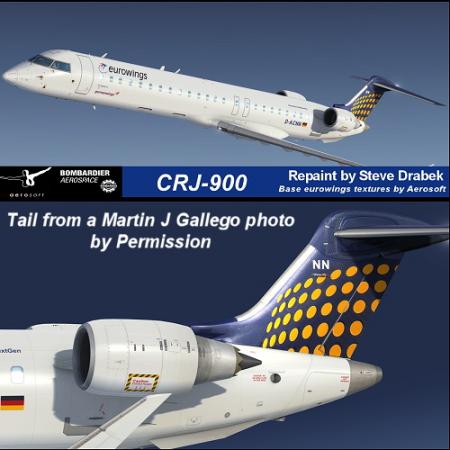 Repaint by:
Steve Drabek
Base Eurowings textures from AS paintkit, Stefan, Holgi and others unknown to me

Aerosoft paintkit (and base textures) by:
Stefan Hoffmann

Installation (CRJ Livery Manager):
Start the Aerosoft/Digital Aviation CRJ Livery Manager and drag the ZIP-File into the list - or click "Add Livery" and select the desired file.
You get a preview of the new livery - and install it with just one click. (You can read all Livery Manager functions by clicking the "?" button!)

The entry for the aircraft.cfg:

Acknowledgements:
The blanks used as a basis for this repaint are by Aerosoft/Digital Aviation. Thank you for the wonderful model and the great paintkit.
Thank you Hans.
Thanks to Holgi for any textures I may be inadvertenly using in paints created from the orginal AS paintkits.  I also used his readme file as the basis of mine (since he's painted 100's of planes for AS).

Thanks to Martin J. Gallego for permission to use his excellent tail photograph!

Legal Stuff:
This repaint is released as FREEWARE. You may use and modify it in any way you wish, but you may NOT use it in any kind of money-making
endeavor, and you may NOT publicly distribute any copies of it, whether modified or not, without my permission.