Gunter's Race around the world in the KLM DC6 PH-TGA 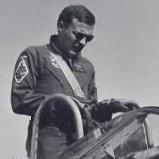 After a nice day in southern France, we planned the next legs. With the weather changing for the worse, we departed Marseille to fly to Bari. After some long climb in pretty bad weather, w